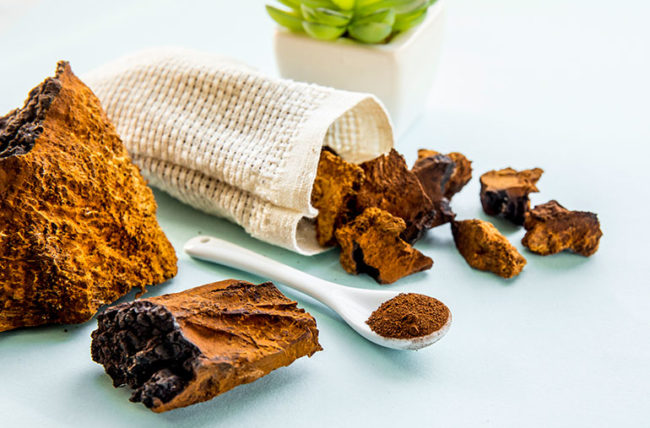 Sure, you’ve heard of portobello and shiitake mushrooms. But have you heard of chaga mushrooms?

Typically found in Siberia, the fungi have been used throughout history to boost immunity thanks to it being full of antioxidants.

So where can you find chaga mushrooms, how do you use them and what kind of benefits will you get?

What are chaga mushrooms?

Chaga mushrooms, which tend to grow on birch trees in cold climates, have a rocklike appearance. They don’t taste like traditional mushrooms. Instead, they have a bitter, yet vanilla taste. They’re also high in fiber and low in calories.

“It’s not like a traditional mushroom you would see in the grocery stores,” says Czerwony. So, you may need to head to a specialty store or a health food store or order it online.

You’ll find most versions of chaga mushrooms in tea, where it has been ground into a powder, though, it has become a popular ingredient in skincare products and is available as a supplement, too.

More research is needed to fully understand the impact of chaga mushrooms, but here’s what we know so far.

High in antioxidants, chaga mushrooms have been found to help fight inflammation.

“By having these antioxidants, chaga mushrooms decrease inflammation in our gut, which can cause problems like irritable bowel syndrome,” says Czerwony.

A study shows that chaga mushrooms can not only help reduce inflammation, but can also fight harmful bacteria.

Many studies show the potential for chaga mushrooms to slow the growth of cancer cells.

“One study said that using the chaga supplement resulted in a 60% reduction in tumor size,” says Czerwony.

Other research shows it helped prevent the growth of cancer cells in the liver. Read more: https://cle.clinic/3wE7SfS

The Mushroom-Based Snacks We Can’t Get Enough Of

The Magic Of Functional Mushroom

For the future of meat, food tech startups look under mushrooms